Giant Chip - The Inside Scoop 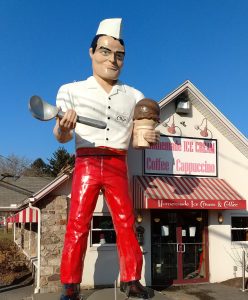 In the 1950’s-1970’s, 1000’s of Muffler Men were made by a California company, International Fiberglass. They were placed at businesses all over North America and were considered to be roadside attractions, especially along the famous Route 66. Hamburger shops, muffler repair shops, and roadside gift shops often had their own versions of the Muffler Man, but most generally looked like this:
Over

Over the years, most of the fiberglass statues (which weighed over 1000 lbs.) deteriorated and were destroyed, so there aren’t too many still in existence today. The Inside Scoop’s Muffler Man foundation started out in the 1960’s in Calgary, Canada at a gas station. 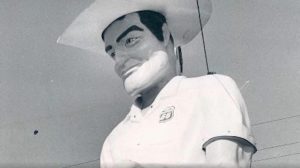 In 2017, he was discovered in a Canadian junk yard and was completely destroyed. The broken pieces of the 20’ tall statue were taken to a fiberglass expert in Virginia who cobbled them together and made a mold of the assembled statue. That mold was then used to form Chip, the Inside Scoop’s giant ice cream scooper. Chip plans on living in Coopersburg, PA at the Inside Scoop for a long time.